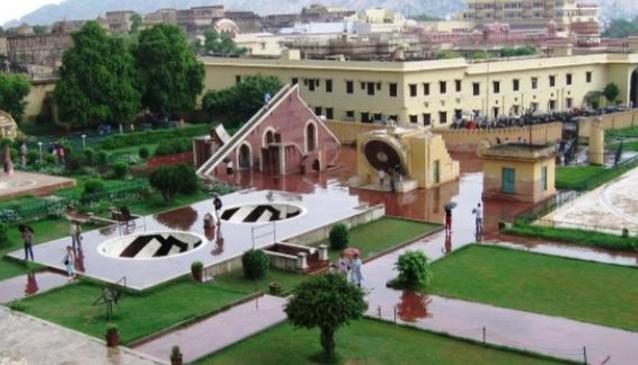 The Jantar Mantar which literary means ‘Instruments of Calculation’, is an observatory which has a scientific, historical and religious significance .A UNESCO world heritage site, it gives accurate prediction of stars and time related to solar and lunar axis. Built by Sawai Jai Singh II of Jaipur, between 1727 and 1734.,Jantar Mantar was built at five places, Jaipur, Delhi, Ujjain, Varanasi and Mathura. The observatory in Jaipur is perhaps the best and most preserved among them all.

People and astrologers during that era used to set their time according to these yantras (instruments) for various religious ceremonies. These yantras even used to predict positions of stars and cosmological bodies. Here you can find the description of all 12 zodiac signs.

Jantar Mantar in effect is an observatory which dealt with astronomical and cosmological concepts. It has fourteen major geometric devices which predict, tracking stars, eclipses, declination of planets etc. One of the most popular and biggest yantra among these fourteen yantras is the Samrat Yantra. This is the largest among all the yantras present and helps to predict time of day. It is 90 feet high and it is situated at 27 degrees latitude in Jaipur. Likewise some other yantras which are present include the Narivalya Yantra, Jai Prakash Yantra, and Ram Yantra etc.

Local astronomers still refer these yantras to predict weather for farmers. Even students of astronomy and Vedic astrology refer to these instruments to further their study and knowledge.

The most astonishing fact about this observatory is that it is the only representative of Vedic thoughts apart from the texts that are available.