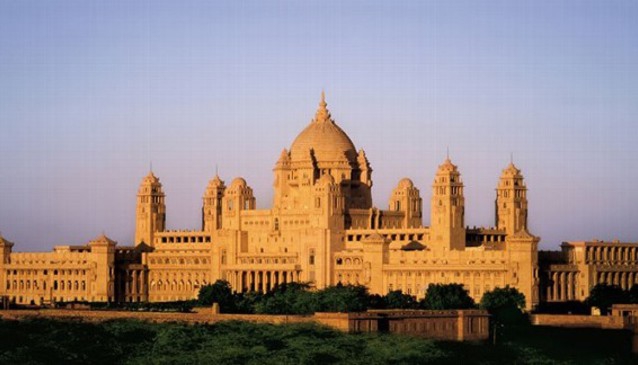 Umaid Bhawan Palace in Jodhpur is one of the largest and grandest private residences in the world. The Palace has a very unique history. It is the only palace which was built in the 20th century as a famine relief project. Under this project around 3000 artisans were given employment. The palace was built in about 14 years. The palace consumed one million square feet of the finest marble. This palace is a splendid example of Indo-colonial and the art deco style of the thirties. It's a golden yellow sandstone monument.

It was named after Maharaja Umaid Singh, grandfather of the present owners of the palace, this monument has 347 rooms and serves as the principal residence of the erstwhile Jodhpur royal family.

Designed by renowned Edwardian architect Henry Lanchester, the palace is a blend of eastern and western architectural influences. Its majestic 105-foot high cupola is influenced by the Renaissance, while the towers draw inspiration from Rajput tradition. The lavish interiors with gilt furniture and elegant artwork follow the Art Deco style, complemented by the exotic murals of the self-exiled Polish artist Stefan Norblin.

In 1977 the palace was converted into a heritage hotel and museum. And in one part of the hotel the royal family still lives.